HUZZAH! I’m under construction. Well, sort of. You can read the old stuff. For now. 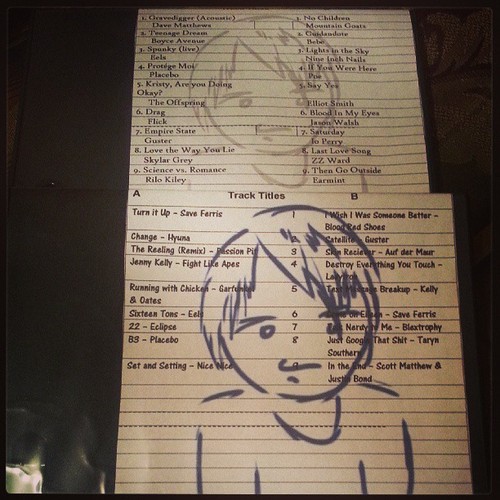 Last night, I compiled and burned two playlists that I dubbed the soundtrack to this blog. Featuring songs I embedded, mentioned, or quoted (in titles or otherwise) on this blog for the last three years (Oh My Wow, right‽). The CDs are meant for my quote/unquote “sisters,” Miranda and my butt-faced hipsis, Ashton Cutright. The two copies you see in Exhibit A were burned for my co-worker, Angela, who started with Volume 2. Tsk tsk tsk.

As hinted in the last post, I’m taking a leave of absence in the blogosphere. Usually, this is a bad move as it results in lost of readership. Considering that my readership is made up of a handful of friends and online comrades coupled with a bunch of perverts Google-searching pics of Linetrap’s penis, I don’t think I’m going to miss out on much (no offense people wanting to see Bailey Jay’s dick, you guys are my bread and butter). Besides, friends and online comrades still have me on social networks – accept those of you who follow me on Tumblr because I think I’m done with that aspect of my life (and the only post you’ll probably be seeing are Instagram related).

The reason for this is that I need to suss some things out in my life. I need to see if these feelings I have building up in the pit of my being are worth exploring. I need to see if I can focus on my creative writing again. I won’t be gone long, I promise. And when I come back, I’m returning to a new logo created by Ashton and a couple of other thing. There’s a lot of revamping for the blog, including that pesky subtitle. After three years, if I haven’t created a sense of place, I don’t think I’m meant to.

As usual, season finales always contain some sort of cliffhanger that draws the audience back. So here’s mine. The last few months, I fell into the greatest depression I’ve ever found myself in. And I lost a great amount of myself in it. But I’ve closed the swinging door. And I’m learning how to pull away from it, no longer am I hoping that it opens. Because I realized the power I gave to her diminished the moment I was able to see someone else in the same light.

So here’s to the next three years and the new adventure I’m going to embark on.


We were never the marrying type, oh no,
We won’t buy dishes or stained glass lights, oh no,
For a table we’ll never sit at,
In the house that we won’t ever get

I won’t wake up and pick out your tie, oh no,
You won’t come home and kiss me at night, oh no,
We won’t lie in this king bed for two,
Say goodbye to us saying “I dos.”

No more white picket fences,
No more lace veils or vows,
No more “You’re the only one” ’cause that’s all done with now,
This is the last love song I’ll ever write for you.

Take these roses and this Jameson, oh no,
Find a subway that I can sit in, oh no,
Buy a one-way out of this city,
Everything that I need, got it with me

All these notes and all these words,
Are all that’s left in me,
Bend these pages, count my woes,
One last song to set me free.

No more white picket fences,
No more lace veils or vows,
No more “You’re the only one” ’cause that’s all done with now
This is the last love song I’ll ever write for you.

In the past, I did something crazy. And I did something hurtful. And I carry these demons, and I’ve let them anchor me in  place. What’s the use of all this knowledge if the simple concept of love befuddle me so? Well, maybe it’s because love isn’t a simple concept. Maybe it’s more than just neurochemistry and psychology. Maybe the emotion is something metaphysical, or supernatural. Not god, but godlike.

Love is more than just dead plant sex organs. It’s more than just chocolate. It’s more than just words and actions that lead to nothing. And maybe it’s something I’m learning to appreciate again, just like learning how to smile and mean it. There are moments when we speak that I feel a shutter in me. Is it love? Probably not. But just those conversations, silly moments, and playfulness. They keep me coming back for more.


There’s a chance that I’m falling in love with Hyuna.

Truth is, I haven’t much to say. I haven’t in a while, actually. I wrote a story titled “Paper Guns;” a skeleton, really. I meant it as a performance piece, a prose poem that I plotted to read off the top of my head during one of the readings (July’s if we have one). Or, if Amado decided on giving me a feature slot, that night. Truth is, I don’t want him to give me one this year. I want to have more than just “the best of” to read.

I resurrected another tale about a family and its business, and started working on the introductions to the main characters – the title brothers. Aside from that, I’m reading up on physics and the theories and the philosophies of time for Holding Hands with Eloise, which has veered from its original premise, though it’s still a romantic comedy on paper. 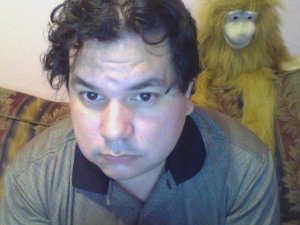 Exhibit A: Pippin photo bombs a picture of a rather defeated and tired me.

In other news, I miss my hair. Despite that it’s hotter than a monkey’s asshole outside, my long hair became a staple of my identity. And now it’s gone, and will probably stay gone for a good long time because, well, I grew tired of having to tame it for work. At least I still have my hat, though I never wear it at the readings anymore for reasons I’m still don’t understand.

I really wish I had more to say. And I guess what’s bothering me these days is, what’s wrong with teenagers these days? Was my generation as reckless as the current one? For that matter, what’s up with kids not sleeping in anymore? Kids waltz right into the library just minutes after opening and it really irks me. It’s summer, guys! Summer.


Woke up from the strangest dream this morning. Pulled out of it, more like it. Maybe it stemmed from watching The Time Machine right before going to bed. Or perhaps I’m just losing my mind. Both seem like plausible reasons.

Anyone ever see that show, Flashforward, before it was canceled? The one where the whole world fell asleep for a few minutes and saw the future during the blackout? Their consciousness removed from the present and blasted into the future. That’s sort of what happened within the dream. A few of us – a mix of coworkers and a few friends – wound up at some dull presentation.

We passed out and had a similar dream about a duck. And the duck spoke. In my dream, the duck spoke my name and told me a few things about another dimension where he lives (apparently one where ducks can speak). I got a phone call from Miranda who told me that she learned about something I kept from her all these years. The dream Miranda never told me what that was, but it had to be bad. Luna, a friend I made over at Tumblr phoned me to report how pissed off she was that we slept together and I didn’t stick around.

“Did a duck tell you this?” I asked. “Because we never slept together. At least, not in this dimension.”

“How did you know about the duck?” she asked.

“We all dreamed about the duck,” I replied.

Later, Joe called and asked me if the dimension the duck was from had me driving everywhere. I, as usual, ignored him.

I’ve a problem. I’m a book addict. I have hundreds of books in my house, and I’ve only read about a fourth of them. And I still buy books, even though I have several unread tomes here. Today I purchased two books (The Elegant Universe and The Fabric of the Cosmos both by Brian Greene) – coupled with the Steve Martin book I purchased yesterday, the text book I purchased over the weekend, the BDSM erotica novel I purchased the same day, a novelization, and the book by Michio Kaku I purchased this morning because carpe diem, librum venator (NOTE: I don’t know Latin; I used Google translator for the second half of that phrase). I’m a book addict and my addiction is worsen when my emotional control has been compromised, which it has been compromised for over a year now. And I don’t see a solution to my problem because the only solutions that are available aren’t solutions, really. So I return to filling the void in my heart by filling up my bookshelves, which are overflowing as it is.

Exhibit B: The Good Book

Another book caught my attention at Barnes & Noble this afternoon – I find myself unable to muster the urge to come home to nothing these days. A.C. Grayling has compiled (written?) a book he called The Good Book: A Humanist Bible. But because the Brian Greene books aren’t for leisure, I put off purchasing the book until a later date (or when I succumb to my itch).

I love the smell of new books. And I love the smell of old books. There’s something intoxicating about the scent of books that eases me into a sort of high that makes me forget my problems if only for a second. I just know that if something doesn’t turn around for me, I’ll be blowing my paychecks (minus the money I put aside for Shaun) on books until they bury me alive.