I wanted to fill this post with emotions. Instead, I’m just staring at the screen. I promised myself this blog’s tone would change during phase 2 because I placed the melancholy behind me.

I’m spending more money that I’m making. Blowing check after check (except what I put aside for Shaun) on books that will take me a few years to get to. I’m running out of space for these purchases. I’m a hoarder of literature.

And I’m digging my grave. I’m spending emotions I cannot afford. Is it possible to like two people, have one of them like you in return, all the while in love with someone else?

I’m not even sure who I am at the moment. If I’m the man or the monster. Am I showing signs of a broken heart? A man on the path suicidal? Let the flame burn me from the inside. Let it consume me until it ignites me, erupting forth from my cavity.

I am the void.

“The world belongs to you. And you belong to the world,” begins Riccardo Bozzi’s minimalistic children’s book (illustrations by Olimpia Zagnoli). I stood there in the children’s department at Barnes & Noble holding the current generation’s The Giving Tree. A simple book with deeper meaning carved into the pages. It is nothing far from beautiful. It’s beauty and tolerance embodied. A must read for people of all ages and for your personal library.

About the book (from Amazon):

You belong to the world, and the world belongs to you; inspiring words for graduating students and anyone experiencing a time of change in their life. This beautifully crafted book is an uplifting gift for people of any age. Stylish graphic art paired with deceptively simple text make this book to be read over and over again.

The World Belongs to You is available at Amazon and Barnes & Noble.

“This is the whole problem with words. There is so little surface area to reveal whom you might be underneath, how expansive and warm, how casual, how easygoing, how cool, and so it all comes out a little pathetic and awkward and choked.” If anything has ever described my inability to handle spoken communication, it’s those two sentences featured in Rebecca Lee’s award-winning short story, “Fialta.” I bounded with the words and characters featured throughout the collection. Rebecca Lee doesn’t create perfect people; she creates them perfectly flawed. She builds relationships like a contractor without a blueprint. The reader falls in love with their vulnerability, their incapability to speak words, and with the obsession with language. I’ve discovered another writer I’ll carry along with me.

Of the seven stories, “Fialta” stands out the most. Aside from it winning the National Magazine Award for Fiction, it is the strongest story featured in the collection. As I read through the passages, the images spilled off the page—a portrait sketched and painted with fine-crafted words and language. It’s a collection I’ll revisit in the future several times. 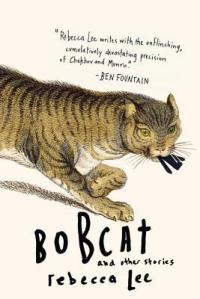 About the book (from inside flap):
Rebecca Lee, one of our most gifted and original short story writers, guides readers into a range of landscapes, both foreign and domestic, crafting stories as rich as novels. A student plagiarizes a paper and holds fast to her alibi until she finds herself complicit in the resurrection of one professor’s shadowy past. A dinner party becomes the occasion for the dissolution of more than one marriage. A woman is hired to find a wife for the one true soulmate she’s ever found. In all, Rebecca Lee traverses the terrain of infidelity, obligation, sacrifice, jealousy, and yet finally, optimism. Showing people at their most vulnerable, Lee creates characters so wonderfully flawed, so driven by their desire, so compelled to make sense of their human condition, that it’s impossible not to feel for them when their fragile belief in romantic love, domestic bliss, or academic seclusion fails to provide them with the sort of force field they’d expected.

Bobcat and Other Stories is available on Amazon or Barnes & Noble. An e-book edition is available for Kindle and Nook.

There’s no doubt that I found the conclusion of Yoshiki Tonogai’s second omnibus as a little unsurprising. I mentioned the parallels to a certain Hollywood gore-porn franchise that peaked somewhere during the third flick. Nevertheless, the journey through the last chapters keep the reader gripping the covers. And it’s not just that, the open-ended finale leaves the reader thirsty for more—thankfully the first book of Doubt’s sequel hit shelves this months.

About the book (from back cover):

Within an abandoned old building, the popular mobile-phone game Rabbit Doubt—in which players must try to discover the wolf in rabbit’s clothing or pay the bloody price—has become a grotesque reality for a group of online friends. As the bodies pile up, the survivors begin to question one another, and the seeds of suspicion take root. Who to trust? Who to doubt? With the wolf on the prowl, culling the herd, will any of the unfortunate souls caught up in this twisted game of murder be there to bear witness when the mastermind is finally unmasked?

Doubt book 2 is available at Amazon and Barnes & Noble.

Last year, I witnessed the end of my relationship. One that I thought was chiseled into stone, anticipating that we’d grow old together. Just last weekend, I “whispered” my inner turmoil. Of realizing I should’ve fought instead of laying down my arms. I started a conversation with a local romantic stating that I should just fix it. What most failed relationships lacked was communication. Communication, I thought. What does she know? More than I expected, actually.

Communication, or rather the lack of communication, is central in Chad Kultgen’s Men, Women & Children. The book’s a portrait of middle America and all the demons we bury in our closets, hide away in our browser histories, between the sheets, and refuse to share in a public setting. It covers football, divorce, infidelity, child modeling, depraved pornography, adolescent sexual urges, depression, etc. It follows the lives of a group of eighth graders seeking out their place in the world and their parents who still haven’t ascertained the goal. It’s a chilling story that echoes Hubert Shelby Jr.’s Requiem for a Dream. Instead of making the case for the death of the American dream, it recites the funeral dirge for the perfect relationship. There are no Hollywood endings for this tale; it just leaves the reader with a sense of awe and a reevaluation of their life up to the point of finishing the last lines.

It’s most certainly not for the faint of heart.

About the book (from Amazon):

The author of The Average American Male and The Lie returns with a shocking, salacious, and surprisingly subtle new novel of the average American family. Like Neil Strauss and Nick Hornby, Chad Kultgen has the capacity to enthrall and astonish even the most ardent readers of contemporary literary fiction. In Men, Women, and Children, his incisive vision, unerring prose, and red-light-district imagination are at their most ambitious and surprising, as he explores the sexual pressures of junior high school students and their parents navigating the internet’s shared landscape of pornography, blogs, social networking, and its promise of opportunities, escapes, reinvented identities, and unexpected conflicts.

Men, Women & Children by Chad Kultgen is available at Amazon and Barnes & Noble. A digital edition is available for Kindle and Nook.

Everyone knows boys are falling behind girls in education. And that has lots of people, especially educators and politicians, busy pointing fingers and engaging in loud discussions.

Largely left out of this discussion are parents of boys, who are perhaps more aware than anyone that their bright, eager sons hit an invisible wall somewhere near fourth grade, after which they go from engaged to unengaged, discouraged, and disaffected. By their teens, too many seem determined to be slackers in school regardless of parental pleas, incentives, or discipline.

There are lots of books on underachieving boys, but most address educators and come complete with intimidating graphs, case studies, academic-speak, and lists of remedies on which parents are powerless to act.

What about the average guilt-ridden, frustrated mother or father of an underachieving boy? Someone who wants to know in plain language what’s behind this trend and what they can do
about it? What about mentors who crave positive support, not political shrillness?

Most existing books on “the boy problem” make parents feel even more helpless than the school system and their job demands have made them feel already. In Jump-Starting Boys, we have endeavored to empower parents and mentors, and to give them a sense of being able to reclaim the duty and rewards of helping their children.

Toward this end, we have heartwarming true stories and take action checklists. Our aim has been to reassure and support, to turn fear and guilt into can-do confidence.

Who are we? Sisters who have raised boys, and sisters who have worked four careers between us: teacher, family therapist, journalist, and author. Pam is the award-winning author of young adult books particularly popular with boys (including Peak Survival, Skater Stunt boys, and First Descent). Cynthia, a former teacher who now counsels troubled families, speaks regularly at parents’ groups and women’s gatherings.

We firmly believe that reading confidence is a keystone to educational success, which in turn increases one’s chances of a more stable, satisfying life. We hope you’ll find insight in Jump-Starting Boys.