“A friendly desert community where the sun is hot, the moon is beautiful, and mysterious lights pass overhead while we all pretend to sleep. Welcome to Night Vale.” These are the first words I hear Cecil Palmer speak in his ghost-like voice. Those words, his nuances—they send chills down my spine and tingle in my ear. Eargasming, I pressed on, listening to the first episode of Welcome to Night Vale. I learned of hooded figures that roam the streets, a forbidden dog park, a vague, yet menacing government agency, rivals at Desert Bluffs, and a scientist with perfect hair named Carlos. It’s not hard to see that Night Vale is like any other city in the United States just weird. Extremely weird. Menacingly weird. How Night Vale still populated with all the chaos, end-of-the-world scenarios, and street cleaning days that occur on a bimonthly basis?

I tried to infect others around to listen to the soothing voice of Night Vale’s community radio host at work. There are few things I get to nerd out with others at work, and—fingers crossed—I’m hoping Welcome to Night Vale becomes one of them. I’ve managed to garner two Night Valiens (is that the correct spelling? Who cares?) with the release of the novel by the same name. If you haven’t picked up a copy, I suggest you do so now (like right now. Stop reading this. Go pick up the copy. Barnes and Noble closed? Amazon that book! Overnight it! Or join Audible and buy the audiobook read by Cecil—best option, if you ask me because his voice is dreamy).

Because I suck at reviews (I really do!), what I’m going to write here won’t do the book any justice. But here we go. Let’s start with…

What Did I Think About the Book? 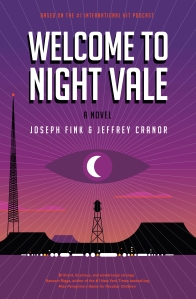 I wouldn’t recommend the book to anyone who isn’t a fan of the podcast. There’s a style in the writing that comes off as bizarre, disorienting, and nonsensical at times. There are also many revelations in the book that would spoil the podcast for you. So if you haven’t listened to the podcast, I suggest starting with that first.

However, Joseph Fink and Jeffrey Cranor wrote the book with non-podcast listeners in mind. They give you just the right amount of detail to follow along. Cecil and Carlos aren’t the stars of the novel, which is a bummer. They both appear in the text (Cecil as the voice of Night Vale and Carlos as a scientist, duh!). The story focuses more on secondary characters from the podcast (and secondary is being very kind). Diane Crayton, PTA treasurer, Jackie Fierro, who runs the pawn shop, and the mysterious man in the tan jacket holding a deer skin suitcase hold the spot light.

It’s a fun read that keeps the chilling, creepy, eerie, and comically strange aspect of the podcast. And I hope this is the first of several books that detail the happenings of Night Vale. Fans of the podcast will love it, newcomers will scratch their heads, but enjoy the journey, and those who hate the podcast will probably not bother reading it.

Lines that caught my eye

This book is filled with them. Here are a few:

“Mostly we don’t get destroyed. Mostly we destroy ourselves.”

“Jackie was at a dead end, investigation wise. In terms of tacos, she was doing fine.”

“She drove home and grabbed the things she would need to check out a book: strong rope and grappling hook, a compass, a flare gun, matches and a can of hair spray, a sharpened wooden spear, and, of course, her library card.”

What is this book about?

From Amazon: “Located in a nameless desert somewhere in the great American Southwest, Night Vale is a small town where ghosts, angels, aliens, and government conspiracies are all commonplace parts of everyday life. It is here that lives of two women, with two mysteries, will converge.

“Nineteen-year-old Night Vale pawn shop owner Jackie Fierro is given a paper marked “KING CITY” by a mysterious man in a tan jacket holding a deer skin suitcase. Everything about him and his paper unsettles her, especially the fact that she can’t seem to get the paper to leave her hand, and that no one who meets this man can remember anything about him. Jackie is determined to uncover the mystery of King City and the man in the tan jacket before she herself unravels.

“Night Vale PTA treasurer Diane Crayton’s son, Josh, is moody and also a shape shifter. And lately Diane’s started to see her son’s father everywhere she goes, looking the same as the day he left years earlier, when they were both teenagers. Josh, looking different every time Diane sees him, shows a stronger and stronger interest in his estranged father, leading to a disaster Diane can see coming, even as she is helpless to prevent it.

“Diane’s search to reconnect with her son and Jackie’s search for her former routine life collide as they find themselves coming back to two words: “KING CITY”. It is King City that holds the key to both their mysteries, and their futures…if they can ever find it.”

You can listen to Welcome to Night Vale on Soundcloud, Youtube, several podcast apps, or by visiting their website. I recommend starting with the first episode (below), but you can start whenever you like.