8 November 2016: I attended an artist reception for Ruben Rios that night. I’d already voted during the early voting days, so the election news could wait that night while I partook in celebrating a friend. Though there was a deep dread in the air. I felt it. So did my friends/coworkers. Midway through the night, we were all checking our phones. Google News alerts kept me up to date that MAGA 4chan fanatics weren’t aware they had to register to vote. Things looked good, even though Hillary Clinton (whom we weren’t exactly enthusiastic for either) wasn’t even in the lead. 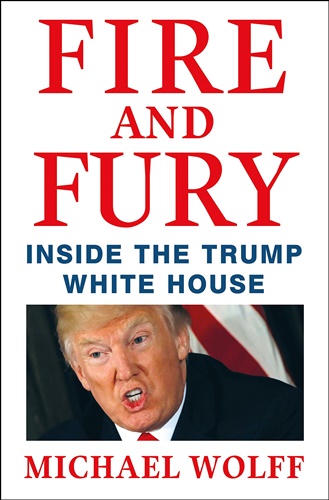 I stayed up late that night as I normally do. I’ve said this before, actually. So let’s fast forward.

5 January 2018: A little less than a year into Trump’s presidency, Michael Wolff was slated to release a book about the first 100 days and beyond. In all true Trumpian fashion, DJT tried to keep the book from being released. This prompted Wolff and the publisher, Henry Holt and Co., to release it four days early. The Trump lawyer’s call to cease and desist gave the book added notoriety which led to it being sold out on its first day. As I entered Barnes and Noble that night, it didn’t surprise me in the least that people were being turned away. And that night, I did something against my philosophy: I paid full price for the e-book.

The book offered no surprises. If it does anything, it solidified my fears and assumptions about the Trump campaign and its presidency. It also caters to the conspiracy theorist type bullshit that lingers in the back of my mind about Trump, Pence, Ryan and the GOP at large.

It offers some insight into Trumps life. From his need to gain approval from his father, the media, and other rich people in the country and the world. How he treats his sons in very much the same manner: “[…] Don Jr., thirty-nine, and Eric, thirty-three, existed in an enforced infantile relationship to their father […] Their father took some regular pleasure in pointing out that they were in the back of the room when God handed out brains—but, then again, Trump tended to scorn anyone who might be smarter than he was.”

It touches bases with the Russian collusion. Underlines how Bannon controlled Trumpism and Trump himself. How Ivanka and Jared (happily referred to as Jarvanka) tried pulling the strings of presidency. How the Republicans in Congress had no idea what they were getting themselves into when decided to back the loose cannon candidate. And, of course, how Trump thinks of women: “Trump liked to say that one of the things that made life worth living was getting your friends’ wives into bed.”

There are some things that I question about the timeline provided in the book, how much is the author’s opinion, and how certain typos go by the editors. (If the title of Stormy Daniels tell-all memoir isn’t entitled “Ferocity and Pubic Venom,” then I’m going to be upset. Michael Wolff offered up a wonderful title!)

It’s a must read for those curious enough to see the going-ons of the Trump presidency. And for those who need some evidence that Trump never actually wanted to be president: “Donald Trump and his tiny band of campaign warriors were ready to lose with fire and fury. They were not ready to win.” But I don’t see this convincing any die-hard Trump supporters to jump ship (even though, several of his staff were wise enough to do so). And if you do read it, do it cautiously. Question things before accepting it as gospel. But, to be honest, there is little about this book that I don’t disbelieve.

Thought about you today. The urge to call you faded when I accepted that I no longer have your contact information. Still, you were on my mind the moment I learned that Dolores O’Riordan passed away.

I recall how excited you were attended a concert several years back. How you swore she was singing just to you. I remember the late night phone calls. Your voice singing a cappella. Or the countless car rides where’d you sing along to The Cranberries.

I wonder how you’re taking the news. Who’s listening to you mourn the loss of an idol?

Why did you turn out the lights?
Did you know that I was sleeping?

10:15. Traffic light paused, a long duration of self-evaluation. The strumming of an old guitar on the radio. Three men pushing shopping carts down the empty sidewalk, sweat glistening off their brow. One of them waves to someone in the distance. A smile spreading across his face like spilled ink on the carpet. Kept the windows rolled down because the fresh air is easier to breathe these days. It ain’t too cool, but it’s not where near the inferno temperatures here. Unless you’re one of those guys pushing carts down the street. (Out of Nowhere)

12:02. Her fragrance intoxicates. She’s an order of homebrew, blonde roast. A voice on the radio reads the time. It makes no difference, the way her words sway throughout the room, filling the air with their magnificence, the tick-tocking of clocks are nullified. Could spend an afternoon memorizing the curves of her lips as they break into her soft smiles. (Don’t Blame Me)

3:15. An old postcard arrived in the mail. No name or return address. Just words scrawled in heavy cursive. “I long to feel your lips against mine again.” Gave a speech at a church last week. Standing ovation. Told the truth of our place in the world. She hadn’t been in the audience, I don’t think. And had she been, would I have recognized her by the brilliance of her electric green eyes? Or by the fire of her auburn hair? There’s a promo on TV for the seven o’clock news. Three men dead. One missing. Killer at large. And I look at the postcard again. Her handwriting isn’t hard to recognize. (My Old Flame)

Criminal anxiety runs through these veins with the blood of a bleeding heart unsure when its next beat will come. The privileged surrender their fortunes to swiping right, make that uncertain phone call for one night of gratitude, and when the ties come undone, the strings fall and tie down the urge once again. Feeling the lack of air when the words choke in the vocal cords. Questions unanswered left asked for another night. The warmth of a brush of hand. Sequestered moments written upon the pages’ squares kept airtight without a memory of every being true. Common words fade; the important ones carved in the oak. Burn the collapsible lung. Learn to breathe underwater. Sit upon the open, watch the world. Sit at the open and watch the world.