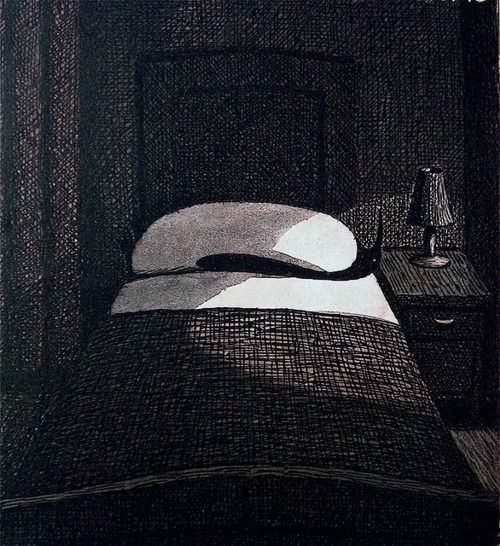 "The high heavens were full of shrunken deaf ears instead of stars."

I was eight when my maternal grandfather died. No one explicitly told me, they just assumed I understood the rituals of one’s passing. As Catholics, my family held rosaries before and after the funeral. It might have been the first rosary that I learned the truth about my grandfather’s death. A younger cousin – possibly a second or third cousin, I’m still not sure – noted that her elder uncle had died. No sugar-coating there. Naively, I muttered my grandfather was in the hospital. That he’d probably get out any day now. The memories are vague. Shattered images of the mirror upon the wall. Shards of the past, reminding me of who I once was. My brother corrected me, or maybe it was an uncle or a cousin. Maybe none of this really happened. Maybe I imagined the whole thing. It doesn’t matter. When my paternal grandfather passed away, I was told first thing in the morning. This was three years after the fact.

Somewhere along the way, I became cynical. Maybe it was always ingrained in my fiber. Encoded in my DNA. I want to imagine myself as a happy kid. As someone adventurous. I never climbed a tree, though. And I never dared cross the street without looking both ways or seeking out a cross walk. Erase that. I was a happy kid. I was content in my isolation. I never went to friends’ houses because I never knew what to do at them. And when I did, I’d fritter away the time wanting to go home. It was more of proof that I could go to people’s houses. I guess in short, I wasn’t the friend type of person. Even though I went, I only did it so I wouldn’t be the weird kid out. Because when I boiled it down, everyone was a moron. Sometimes, I suppose, don’t change.

The world was never a pretty place. I had little hope that anything good could come out of the Valley. It’s a desert masquerading as paradise. That’s how people got suckers to move here in the first place, isn’t it? Promised a paradise and they got stranded in the buttfuck of a desert somewhere between Texas and Mexico. So I can’t call myself a disappointed idealist. I’m far from an idealist. Ideals are insignificant. Sure, it’s one thing to believe humans should be one way, but to believe they can? That’s asking too much. Essentially, everyone’s a moron until proven otherwise.

Ramblings of an Asshole

Pardon me for being a snob. No scratch that. If there’s one thing I want to pass down to my child, it’s not to apologize for being who you are. If you hurt someone’s feelings, sure. Apologize for hurting their feelings, but do not apologize for who you are. The truth of the matter is, I think the majority of people are idiots. If you sole ideal of literature are the books of Dan Brown and Stephen King, you’re an idiot. If you’re sole source of cinematic entertainment are films by Jason Friedberg and Aaron Seltzer, you’re cinematically retarded – for lack of a better term. And if you find the Paranormal Activity film franchise as the scariest movies you ever seen and are responsible for their high gross in money during opening night, not only are you  a flaming moron, but you should be barred from watching any horror movie ever again.

And hey, I can be wrong. Most instances, I probably am wrong. Why? Because none of these things hold any merit. There isn’t any fiber of what I just said as fact because I have no supporting material to back it up. That’s why it’s my personal goddamn opinion. And goddamn you for trying to take that away from me. It’s not in your right to stifle my thoughts, but it is in your right to disagree with me. And I’ll allow it. Will it sway me? Possibly not. Will you be a hero for it? Possibly not.

And what is most commonly thrown in my face is the fact that I graduated college. That I studied English. That my humanities courses have made me this way. Anyone who’s known me for years know that the asshole went into college as an asshole and emerged as an asshole. So no, I don’t like Harry Potter because my literature teachers told me what is popular isn’t good. I don’t like Harry Potter because I don’t fucking like Harry fucking Potter. I didn’t like it in high school when the books first popped up in American culture. Same thing with Stephen King. It has nothing to do with their popularity – I like Tess Gerritsen’s Rizzoli and Isles series, for fuck’s sake. And why is that? Because it doesn’t bore me. Not because I believe her as the fantastic writer in the world – that’s Philip Roth‘s title.

While we’re on the subject, stating “in my opinion” or “IMO” is pointless. I know it’s your opinion, there’s no need for it. Of course, what do I know? My composition courses jaded me.

How does this connect with your intro?

It doesn’t. Not really. Or maybe. I do remember being upset with my mother for not telling me the truth, for pussy-footing around it. And I do remember that I was an asshole to her even though her father had just died. Or maybe not. It’s hard to tell.

Fuck it. I’m a snob. I’m an asshole. I’m everything label you want to throw at me. If I wasn’t, would you even bother to read what I have to say?