Like a car crash I can see but I can’t avoid
Like a plane I’ve been I never should board.
Like a film that’s so bad but I’ve gotta stay til the end.
Let me tell you now,

It’s lucky for you that we’re friends.

I wasn’t sure which song should start this post, or which title I should go with. Lucky for you all, I decided on both songs (but because WordPress gets all screwy when I place a song in mid-post, I’ll start with Pulp’s “Like a Friend,” and end with the Taylor Swift cover (that’s right, Taylor Swift).

Shall we get started?

“I never apologized to her,” I tell Miranda as we drive down to I can’t remember where. A feeling that’s bothered me for years now out in the open. I never much spoke about, though I alluded to it since.

“And it bothers you that she’s forgiven you without needing to?” Or something to the matter.

Friday, Miranda kidnaps me. We visit with Monica. With Joe and Erika. We talk about a history. My history. A sliver of hers. It’s a long time coming, actually. We talked Jeanna. We talked Shaun. 2008. The person who’s currently residing in my mind. We talked about stupid things, too. And even in pain, I felt transported to the days when it was just her and me.

“It’s a swinging door,” I confessed. The reason that letting Jeanna go is difficult for me. And a swinging door opens from both sides. A Hank and Karen relationship. No matter where I stand, no matter how much I’ve distance myself from loving her in the past. She has the power to open that door, and I go running back to it over again.

My moving on is against the rules, in more ways that one. This hallway isn’t unfamiliar to me, and if that door opens again, I’ll hurt someone who I care about (hypothetically) like I have done in the past. 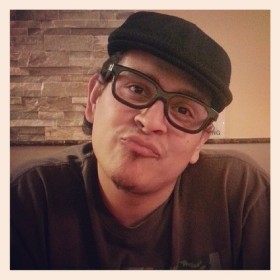 Exhibit A: Meester Binx was feeling 22

We caught up with Meester Binx (Joe) and his wife, Erika, at some Chinese cat restaurant in McAllen. Binx made for my hat, popped out the lens of his 3D glasses, and made a face (which we all snapped a picture of, I’m sure). The owners turned on their karaoke machine, and offered us a take at it. “Only if it’s a duet,” I said. “And only if it’s Nancy Sinatra’s “Somethin’ Stupid.” Of course, I selected Meester Binx as my partner. Alas, nothing happened. We paid – Binx paid – and we ventured off to his home in Pharr where we sat around watching No Country for Old Men while the women folk spoke women folk stuff. Finding it a tad humorous that my “going out” included lounging around, watching a movie, I texted Angela (earlier, I told her about canceling my plans with Miranda due to my pain. When I told her my plans about going out – drinking coffee at Starbucks or Barnes & Noble – she opined that it was hanging out. She defined going out as watching movies with friends, to which I stated that’s my version of staying in) because I knew she’d enjoy the irony of it. Binx attempted to steal her number from me by reading over my shoulder. I punched him for that. Later, I chased him around the house with an aluminum baseball bat. Don’t ask about the transition.

On the way home, we concluded our discussion about Jeanna. About the girl. About the superficial things that would irk me if a relationship were possible. She suggested that I throw my hat into the ring, because a failed relationship isn’t a bad thing. Hypothetically speaking, I think I’m ready to move on. Realistic speaking, I’m not ready to even think about a new relationship. But I think it’s time I locked that door.