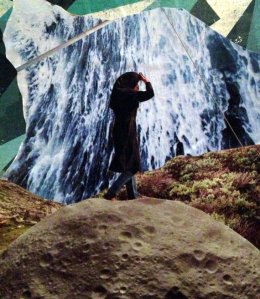 I find myself at a stalemate. Last month, Jeanna asked me if there was someone else. I seemed happier and I’m usually happier when I’m “talking” with someone. “No,” I lied because even though there is someone, I’ve not been vocal about my feelings with someone. She makes me smile. She gets my mind off things. She’s great. She’s sweet. She’s smart. And she asks about Shaun, and that’s a great sign that there’s potential there if she felt the same way for me. Earlier this month, as we were lying in bed talking about her problems, I confessed to her that there was someone who holds my interest.

“Why haven’t you told her?” she asked me, echoing my words five years ago when she left me for the interest of another. She’s echoing Ashton’s words, too. Ashton’s always cheering me on, my hipster cheerleader with a Justin Bieber haircut and a craft that outshines anything I’ve managed to spill out.

“Dude, she likes you.” “You both like each other.” “You should take her out on a date.”

I smile more knowing I get to see her. And I look forward to conversations. And I just don’t know why I don’t just get the courage to say something. It’s high school self repeating in adulthood. I admire from a distance because the moment feelings are admitted, things go south. Should she not feel the same about me, then things get weird.

“They only get weird if you let them, Gil,” Ashton would probably say, even though I’ve stated a hundred times before how I loathe that name (there are reasons, but I won’t get to them here).

“Things get weird because they’re weird to begin with,” I’d reply or some bogus doobie-without-the-doobie philosophy.

“It’s unfair,” I told Jeanna. It’s unfair to the person who’s stuck with me next. Unlike Jessica or those who came before, moving on from this relationship is proving difficult. Is it because I loved Jeanna? After nine years, I’d imagine that love is the only reason I stuck around. Is it Shaun? Is it this feeling that I haven’t had closure because every time we split it was by her hand?

And she confessed something and withheld something and both broke my heart. That continues to break my heart. Then I think about the conversation. And how, no matter the falling down (I’ll explain this later), the nausea, and whatever else went wrong yesterday, I didn’t lose the feeling it left me.

One thought on ““The Second I Do, I Know We’re Gonna Be Through…””