Ladies, stop idolizing your boyfriends because he has done nothing for you until he has made you a wife. Because that’s your role in life. Forget about everything a guy can do for you. Because it’s nothing compared to a ring on your finger and wedding vows. 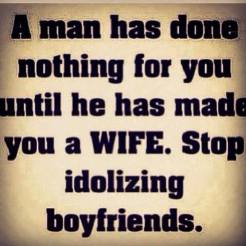 Look, I get it. Girls are conditioned into believing that becoming a wife is the greatest thing in the whole wide world. Disney has marketed damsels in distress, tricking young girls that there’s a Prince Charming out there for every single one of them, just as much as porn has tricked young men that every woman is an insatiable slut who likes spunk on her face. We’re raised in fiction and we long for it, and we poison the minds of children with the same fiction. At least, in recent times, Disney has tried to stray away from women needing men to save them—though, they fail on all scales about the whole beauty image.

Isn’t it a little, I don’t know, backwards to believe that becoming a wife completes the woman’s cycle? What about children? Stop idolizing boyfriends! The image demands, but what of the boyfriends who lost their lives in war? Or the boyfriends who died protecting their girlfriends during the 2012 Aurora shootings? Surely, they should get some honorary mentions for actually doing something of greater importance than putting a ring on it.

What of the women who don’t want get married? Considering a man will never truly make them a wife—unless, you count common law marriages, which I’m assuming the person behind this image doesn’t—are those boyfriends not worthy of idolatry? I’m going to make the assumption that lesbians aren’t included in this (sorry!).

Stupidity like this burns me because it spreads like wildfire, infecting blank-slate minds like young women and children, carving into them that marriage is less than an option and more of an obligation. Maybe we should stop idolizing idiots who think that this is deep. Your life might be a lot better in the end.