A few years ago, I watched this gem of a movie called Yes Man. Starring Jim Carrey and the ever-beautiful Zoey Deschanel, the movie follows a divorcee who’s let his life turn to absolute shit. After a chance encounter with an old friend, Carl (Carrey) attends a seminar where he learns the Power of Yes. Good things start happening for Carl when he learns to say yes more.

The movie is inspired by the book by Danny Wallace. Though nothing like the film, Wallace’s memoir follows his life during his year of saying yes. Since watching the movie and reading the book, I mulled the thought of saying yes more. Of stepping out of my comfort zone so long as it doesn’t harm me or others.

Of course another film inspired me to ask myself the ultimate question:

Last week, a coworker asked if I’d be her partner for a dance class we’re having at [redacted]. I turned her down because that’s what I do when it comes to taking a chance. By Friday, after writing a much needed letter of closure—a version of which will appear on the blog—I sent her a message on Facebook: 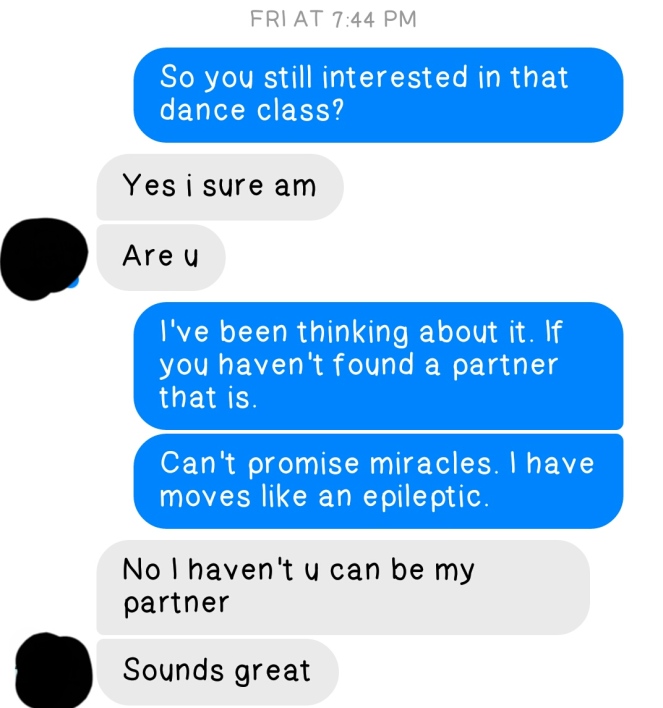 After agreeing to be her dance partner, I realized that life isn’t about reading the same book over and over because it’s safe. It’s about owning a library and being comfortable in whatever skin you’re cursed or blessed with. And this is a lesson I’m still learning even in my thirties. You bring the moves; I’ll bring the awkward.

I’ll make this post short. I woke up early and my thoughts are backtracking onto something else. Waking up early is part of my new way of life, by the way. I need to schedule time to write. And if losing sleep is the solution, then let it be. This is why coffee exists, anyway. Though at the moment, I’m drinking tea. And not a very strong tea.