When Carrie Fisher passed away at the tail end of 2016, there was a great loss in Hollywood and mental illness awareness. Like many Star Wars fanboys and fangirls, I struggled with the loss of a princess, a general. Of a freedom fighting rebel. With the second installment of the sequel trilogy on its way later this year, many fans worried what would become of General Organa. Will they call for reshoots? Gracefully retire the character as they did with Paul Walker’s in The Fast and The Furious franchise? Or will Leia and Han be reunited in the afterlife? These thoughts surfaced my mind one night, a few weeks ago, at Barnes and Noble. There’s no denying it—the only reason I even fathomed picking up th 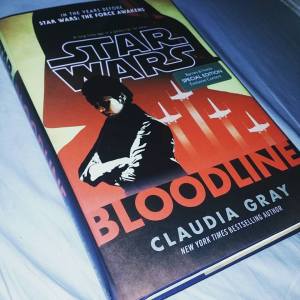 e Claudia Gray novel, Bloodlines, was because I stilled mourned the loss of a great actor.

And I don’t regret it for one second.

Before Bloodlines, the only Star Wars novels I read were Joe Schreiber‘s expanded universe novels (now known as Legends because why not?) Death Troopers and Red Harvest. And while those were fun to read, they didn’t exactly add to my fandom. (Though zombie Siths with lightsabers, I mean, what’s not to love?) But Claudia Gray (and the other writers of the new canon) have some serious shoes to fill. After reading this novel, it’s safe to say that the story can only get better.

Set decades after the destruction of the second Death Star, Senator Leia Organa sees the New Republic tearing at the seams as the two factions that make it up are at a civil unrest. Populists, like Leia, “believe individual planets should retain almost all authority,” while Centrists “favor a stronger galactic government and a more powerful military.” Leia knows exactly what happens when one person is given too much power. How could she forget when her biological father was the same man who took pleasure in aiding the destruction of her home planet of Alderaan? When suspicious activities are called into question on the subject of Nikto cartels, Leia volunteers to lead a senatorial investigation. Much to her displeasure, she is joined by Ransolm Casterfo, an up-and-coming Centrist with a collection of Empire paraphernalia (think Nazi memorabilia collector).

As the investigation takes them into new territories, both senators began to realize just how fragile the New Republic is. And as they get closer to uncovering a galactic terrorist group, Leia is faced with another problem as her greatest secret comes to light.

This novel answered some of the questions I had when watching The Force Awakens. Such as where did the First Order come from? Why is Leia general of the Resistance? Why is there even a Resistance in the first place? Wouldn’t the New Republic have an army? Where is the First Order getting its money to fund the behemoth Death Star 2.0 they have? What happened to Han and Leia? Why did I pay money for just seeing a brief moment of Luke Skywalker? (OK that question goes unanswered.)

Like the recent Star Wars films, Bloodlines gives women the pilot seat (if you listen closely, you can still hear the groans and moans from nerd-boys like Max Landis). While men like Casterfo, Han Solo, and Joph Seastriker play pivotal roles as rescuers, they’re basically just the Mad Max character in a movie about Imperator Furiosa. In short, Leia Organa has always been a bad ass and newcomers Greer Sonnel and Korr Sella can hold their own, even in the face of danger and uncertainty.

The book is political driven (and, nightmarishly, mirrors our own politics) so there are moments in the prose where pitfalls happen. But pay them no attention as Claudia Gray packs action and suspense around every corner. The book ends with some uncertainty about certain characters and plot devices, leaving you yearning for more. I only hope that Claudia Gray (or any writer of the new canon) plans on revisiting them in the future.

Bloodlines is the perfect supplemental material needed to fill in the Star Wars shaped—nay! The Carrie Fisher shaped—hole in your heart.