I have this saying: A good book’s worth whatever the price, but a bad book always costs too much.* I picked up a copy of Barbara the Slut and Other People by Lauren Holmes. It was a bargain priced book, an excess copy that Barnes & Noble was trying to get rid of. 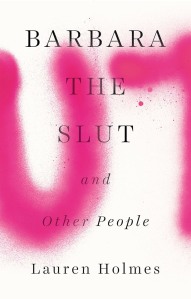 I wanted to read the book a couple of years ago when it was first released in hardback by Riverhead Books, an imprint of Penguin Random House. There’s always a hesitation when it comes to me buying a collection of stories by a debuting author. I was a bit more reckless in college when I purchased Julie Orringer’s debut, How to Breathe Underwater.  However, I never regretted that purchase—and, I purchased the book new.

How to Breathe Underwater is a prime example of a book worth its price. Not so with Barbara the Slut and Other People. First story left me wondering if Holmes just grew bored with writing it. The second left me wondering the same. By the third, the realization that even at bargain price this book was too much.

The biggest problem I see with these stories is the lack of endings. Lauren Holmes offers several “non-endings.” And I define non-endings as open-ended conclusions that felt unplanned by the writer, leaving the reader confused and annoyed. (Imagine seven or so cut-to-black Soprano-styled endings.)

There aren’t many lovable characters in the story. They’re human, except those who aren’t, with flaws and dreams. But most of them are fall short of being relatable. Most come off as flat and underdeveloped, lacking motive in the their actions. And several seem to have suffer from fatigue as several of the stories end with them sleeping for a long time.

There are two stories I did enjoy in the collection. “My Humans,” a tale told through the eyes of an adopted dog, focuses on the crumbling a relationship. We’re giving the ending before it matters to the reader. So when the story does end, the blow is swift but strong. “Desert Hearts” tried to the same method, but it missed several marks. Still, the story is worth reading.

If you find yourself holding a bargain priced copy of Barbara the Slut and Other People at a Barnes & Noble, perhaps place it back on the table. If you really must read it to see for yourself, please check your local library to see if they have a copy.

*Ok, I’m not sure if I came up with this saying, if it’s a saying I picked up somewhere, or a saying that I heard someone say about something, but I later changed it to make it about books. Either way, it’s a saying and it’s a philosophy I live by.