“That’s the horror, the most awful thing: to have a child the world wants to destroy and know that you’re helpless to help him. Nothing worse than that. Nothing worse,” writes Matt Ruff in “The Narrow House,” just one of the many interconnecting stories that make up his novel, Lovecraft Country. Set in Jim Crow era America, the novel tackles racism in a Lovecraftian way. It’s done so well, it can’t even be considered ironic—can it? 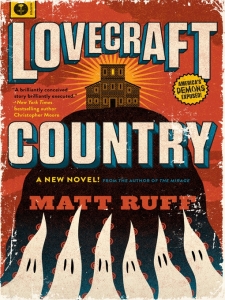 Unless you’re a delusional nutcase, there is no hiding the fact that H.P. Lovecraft had some unsavory opinions when it came to people who didn’t look like him (i.e. a white male). This can make it difficult for a person of color (or a woman, for that matter) to enjoy the book without the nagging realization that the author penned a poem called “On the Creation of Niggers.” Or that, in his story, “The Rats in the Walls,” the narrator’s cat is named Nigger Man.

There is no forgetting that the greatest monster this country has to offer isn’t some unknowable creature that lurks in the dark or some interplanetary beast with an insatiable appetite. In the title chapter/story, Atticus is pulled over by a state trooper for no other reason than being a black man in a predominately white county. In “The Narrow House,” Montrose remembers his father’s death during a race war. In “Jekyll in Hyde Park,” Ruby is given a job opportunity that allows her to shed her blackness in exchange for white skin and red hair. Amateur astronomer, Hippolyta Berry explores a planet only few humans have set foot upon in “Hippolyta Disturbs the Universe,” only to learn she’s been the pawn of a dead man’s game in order to further punish the black housekeeper he imprisoned there. And the interconnecting plot has Caleb Braithwhite using these African-American characters as pawns in his elaborate take over of natural philosophers.

The novel is reminiscent of the Lovecraftian tales mixed in with dark comedy within the pages. It’s a must read for those into weird tales and escapism. For those who loved the film Get Out, this is the book for you. And it’s not just because Jordan Peele is producing the TV treatment Lovecraft Country.

Well, until next time, keep on huntin’.