Sometime ago, I happened upon a s’mores post on How Sweet It Is offering up 13 recipes on the gooey-goodness. Of course, I happened upon the page while I was “working” at the front desk instead of “working” in the stacks like the good book slave I am. And of course, my coworkers, let’s call them the Mikes, sat with me at the front desk also working. I ticked off a few names linked to their recipes, but nothing really caught my attention because I was busy checking out other recipes on another window. Before x-ing out the window, I scrolled to the bottom of the post, the last image. Wait. Wait just a bloody second. Is that…Is that….? Oh. My. Taco-god! That’s fucking bacon! It’s the holy trinity of culinary divinity sandwiched between two graham crackers. The ooey-gooey messiah come to feed us his body. Of course, at the utterance of bacon, my coworkers became interested on my computer screen.

“That’s what we’re having at our next together,” Mike said.

“I want to try that,” Mike nodded.

“It shall be done!” I exclaimed, throwing back my chair as I stood, and clicked the like to its recipe which I printed and wondered why I stood up in the first place. 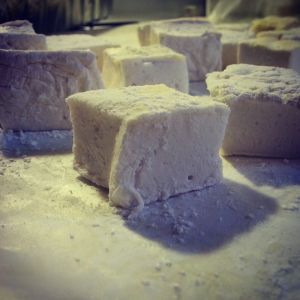 Friday, after work, I headed for the liquor store. As a non-drinker, paying a visit to liquor stores is on par as finding another world within a wardrobe. I found honey bourbon, but that’s not what I wanted. I found every sort of bourbon, but not regular every day bourbon. Finally, a worker saw my utter confusion and asked if I needed help. “Yeah,” I felt defeated, “I just want regular every day bourbon. No honey or pepper jack cheese, just straight up bourbon.” He aimed me at the right direction and I stood in front of the shelves and I stared at it. Sonuvafuckingbitch, there are like a million varieties of the same fucking booze. I grabbed Devil’s Cut (because it felt right and I loved the bottle it was in) and paid my $30 and left. This afternoon (being Sunday), I followed the recipe (though I still haven’t come around to buy a candy thermometer so I sorta just stuck my finger into the boiling sugar concoction to decide whether it was 240 degrees*).

We got to the park at little after six where we failed to talk about the anime we watched (these outings are actually gatherings for our anime club), Nyan Koi!, though Angela and I both expressed our disappointment with the open-ending. Mike brought child-friendly marshmallows for Shaun and his daughter while Mike and his girlfriend brought cake and cookie brownies. We played, we joked, and Jeanna, Shaun and I left first (keeping with tradition). The bourbon marshmallow was a hit.

Next month’s discussion will follow Elfen Lied, which is no longer on Netflix (sonuvabitch!), but no bother. I liked that one enough to own it (though I’ll probably wind up streaming it).

*Didn’t happen—DON’T TRY IT AT HOME!

You gotta laugh at yourself sometimes. But I prefer laughing with others. And usually at others. Saturday, Angela snapped this picture and sent it my way. I was eating with my family when I received it (thanks, by the way, Ang). “OK so does this logo on this sign seem weird to you?” she texted. We talk about my haircut because I honestly didn’t look at the picture because I was eating with my family (cannot emphasis that enough). She humored me for a bit, but pressed on (exaggeration), “So did you see anything odd with that sign logo?”

I look at it, smirk, but fear that I’ll be chastised for being a pervert, so I use a Brit slang that means something different here. “It looks like a fanny?” I replied.

“Haha. OK. That wasn’t my original thought though,” she replied.

“Pretty please,” then, “Sugar on top and all that jazz.”

“Lol. Fine. But remember you wanted to know. When I first saw it I thought it looked like lady parts.”

I responded how fanny to the British doesn’t mean butt, but the female genitalia. We chuckled about it (well, I chuckled). We talked vaginas and men for a bit. I made some jokes at myself. Yada yada yada. Flashforward to today, where we learned that shirty is a British synonym for angry. “How’s that angry?” to paraphrase Angela. And just before I can opine that the Brits are a funny people and why is fanny a pu…, a thought crosses my mind about the picture. And the same thought smacked her because I then see her taking out her phone and showing the Michaels the logo. “What does this look like to you?” she asks them. And they both reply, “An A.”

“Think dirty,” I say. Still nothing. They don’t see it. “I guess we’re the only ones with a dirty mind,” I say.

She tells them. Michael asks, “Top parts or bottom parts?”

“If you have to ask, then you obviously don’t see it,” she says.

It’s agreed that A will now be code for the word. Later, the third Michael walks in to which Mike tells Angela, “Show him your A.”

“I’m gonna have to write a story with a conversation that ends with the sentence, “Never doubt the power of A.” life goal,” I texted her later in the night.

I don’t drink, but I’m one angry drunk. Someone once told me that drinking is a lot like not getting enough sleep. Sleep deprivation can bring out the same demons that alcohol can, only it’s less fun (which, I believe, is a matter of opinion). Take for example, I want to believe that I had more fun chatting with my friend Grace on Facebook ’til one-in-the-morning than I might have drinking. Because I, you know, had to go into work this morning.

Someone also once told me that staring at a computer screen before you decide to hit the sack can cause your mind to believe it’s day time, or some shit like that. Basically, you’re tired, but you mind wants to play. So after hopping off Facebook last night, I couldn’t sleep. And it’s not a complaint. I’d do it all over again because I got to get some things off my chest that I haven’t (due to censorship and pride) been able to say online and at work, respectively.

However, the lack of sleep (and the inability to call in sick) left me grumpy at work. Something that both Mike and Angela picked up right away. Angela told me to drink my coffee for the both of us (she’s given up her two main sources of caffeine), so that my nerves wouldn’t be wound up. Fat chance, though. I never told you about Brittney, have I?

See Brittney was a gift from Workforce to alleviate my stress. When Ms. Lopez left us, the books were taking longer to shelve because there was only me. Stress built up. My coworkers did help me after a bit, realizing how broken I was becoming. But Brittney arrived and things were supposed to go back to normal, like when Ms. Lopez was there. And for a short period, it did. A very short period. Like an hour.

She lodged a complaint against the department because we don’t do anything but sit around. That day, however, we managed to read the shelves (me), decorate the department (Angela), finish the puppet show (Mike), get the A-stand set up (Ruben), decorate the glass shelves and display books (Michael and Angela), and shelve a cart (me) all before her lazy ass did one thing. She believes (and maybe it’s our fault) that she’s staff that she’s capable of doing the things we do when we’re not shelving. And while we do recruit her when she’s needed, she’s not supposed to anything but book/shelf related duties. She also stated she hated taking orders from us that Alexa played favorites because she spoke to us (we’re her staff that’s what she does). It left me pretty fucking annoyed.

This week has been one annoyance from Brittney after another. Starting with her inability to comprehend or complete a task. When we get carts, we get what’s on the cart. Sometimes we’ll divide up the sections (nonfiction, fiction, and easys) and head off. But most of the time, we get what we get, sort them, and shelve them. No. She’d rather do the easys because all she has to do is sit on her fat ass and roll. And even that is too much work for her. The other day, Michael and I divided two carts and sorted them. One nonfiction and one easy. A complete cart of easy was waiting for her. I told her that she didn’t need to sort them because they were in order already. Her reply was, “I’m not taking the whole cart,” as if that were an insane, impossible task to perform. Alexa told her she didn’t want her breaking the carts into smaller parts. Mike told her to take the whole cart. Angela told her that it would be easier to take the whole cart. The entire day at work was spent telling her to take the whole cart. She broke them up in sets of twenty and took an hour to do each set.

Today, Mike, Angela, she, and I shelved books. She dumped most of her cart on Mike because she was in the mindset that we were “dividing and conquering,” though her conquering skills need work. Mike managed to finish his cart of nonfiction; Angela managed the same. I managed to finish my cart of nonfiction, fiction, and easy. All three of us were done before she even dented her cart of easy books. I started reading the shelves while Mike and Angela started opening the new supplies that came in and taking inventory. Britteny? Hovered. I gritted my teeth. I wanted to bark at her that the easy shelves needed reading (according to Angela, Brittney stated she’d done six Thursday and another six Friday, which, of course was bullshit). After a while, I found myself leaving wherever she parked herself. I couldn’t be near her. I kept seeing red. I just imagine taking all the pent up anger I felt and smashing her shitty face with it (not literally, it’s NEVER okay to hit a girl, no matter how fucking annoying she is). I purposely let it slip that she was annoying me to another department worker because Brittney goes there after lunch. I’m hoping that word slips that she’s pissing me off by her inability to do anything but exist.

I don’t mind volunteers who slack off, because they’re not getting paid. But Brittney’s getting at least eight bucks and hour to piss me off. And that, my dear readers, is uncool.