The problem with me being happy is the after effect. Unlike the majority of you, being happy is a tiring task for me. As my friend Monica just explained, it’s because it’s not my “natural state.” My natural state being somewhere in the grey – I’m not depressed but I’m not happy either. I’m devoid of mood, of emotion.

This morning I decided not to get out of bed until close to eleven. The weight of yesterday’s jubilation left me sore. My muscles ached. Returning to the grey is probably the worse feeling one can have – it’s a sort of happiness hangover (though, I’m only speculating as I’ve never had a real hangover). I suddenly feel like I’m in one of those French movies where the guy is going through some existentialist crisis, walking through the day – going through the motions – smoking a cigarette. It’s a black and white world and the events of the day don’t make any sense – not because I don’t speak French, but because most French films don’t make sense. I suppose it’s one of those days when Jean-Paul Sartre and Albert Camus should be my best friends, if not, my drinking buddies. 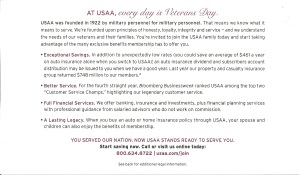 In the murk of my day, I receive an invitation in the mail. It seems my nickname identity has served, fought in battles and made sacrifices. It’s strange, how I don’t recall serving in any form of military. Things like these – like the time Michael Steele decided to enlist me into the Texas Republican Party – I normally scan because I find them humorous. (I blame my subscription to Imprimis for this mistake, rather than the carelessness of the GOP.) Though, I can’t understand where the USAA got their intelligence on me – but the invite does open up with If you are a veteran who honorably served out nation… So it does start with their uncertainty of my so-called service. And it’s not like I didn’t think about it in high school – a Marine hounded me, wanting nothing more but to enlist me (he also popped up during my first years of college) – but we’d just elected Bush as president and the chances of me dying in a pointless war were very high – VERY high.

Again, I return to the French movie feeling. I looked at the letter and didn’t know what to make of it. Has Willie lived a life without Guillermo? Is that even possible? Chances are, these goons bought my name off Esquire as I subscribe to the magazine.

Anyway, I’m off to return to my murk. To live my life in the grey. Hopefully my spirits return. Hopefully.