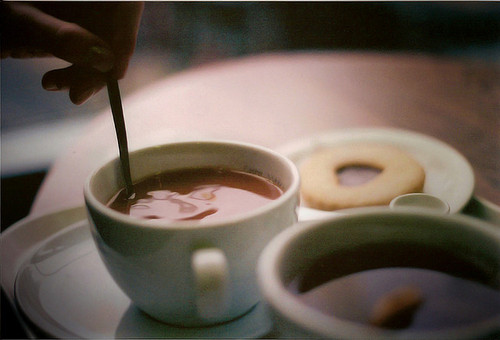 It started with us lying on the bed, watching movies. Our Friday nights consisted of whatever film caught our attention and we’d hole up in my bedroom, drifting from this world into theirs. From boyhood tales like The Dangerous Lives of Altar Boys to the demon-like aliens of Signs. These Fridays were ours. We dropped the movies and added a couple of friends. Still this was our ritual.

I thought about you the other night, while flipping through Tumblr one sleepless night. I came across a picture of a guy and this girl with the caption suggesting that they’d seen hell and high water. How there wasn’t a time when they weren’t the closest friends. And I wondered what happened to my best friend. The person who I turned to for adventure, trouble, fun and comfort. I get it. Adults have to mellow out, especially when children enter the picture. And I’m not the best at adapting. So rather than falling in line, I quit on you. Though, you quit on me before I did.

Rewind the tape, move the spindles back. Remind me how we got here. Seventy cigarettes later, we are walking down the open path and wandering in different directions. I had a nightmare last night. I saw you and you were drowning. I was reaching out to grab your hand, but there wasn’t anything to grasp. You’d given up. You let the current take you far, farther and farther away from me. Quick edit here. Fade to black.

YOUNG ME:
(eyes moving from the TV to YOUNG YOU’s ass)
Must you lie like that? All I get is a full view of your ass.

YOUNG YOU:
Deal with it.

FLASHFORWARD: We sit at a party, across from you. How can we ignore the – what is it? an elephant? – creature in the room that lurks in the shadow.

I’m getting lost here, between reality and fiction. I created worlds to hide my feelings of loss. I bury them in the literary dirt. Demons in the closet and skeletons of my past. I drink heavily, but never had the taste of alcohol touch my lips. I smoked myself into a cancerous state, but haven’t picked up a cigarette since that day we sat outside the theater, waiting for our friend to sneak us in to watching some film about fast cars.

“You smoke it like a joint,” you said. Up until then, I hadn’t smoked anything but.

Where was the reality in that moment. I should’ve said something then. I should’ve grabbed your hand and said that we’re fighting the future. We’re not gonna win. Don’t let me fuck this up. Don’t let me go blind with the lust of some girl who will only be the beginning of the end for us.

I hugged you once. I tried to comfort you. It was weird, remember? We promised never to do that again. I missed that moment. I’m having a hard time remember if it happened at all.

One thought on “The Weekenders”