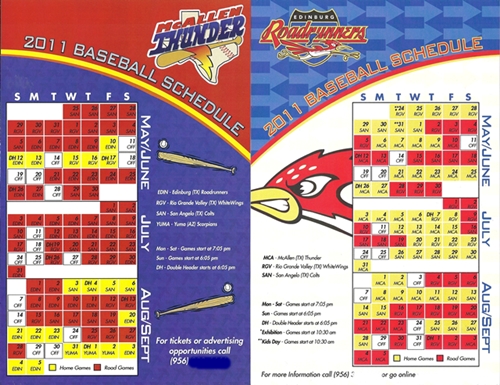 As none of you know, each summer I work at the Edinburg Baseball Stadium, the current home of the Edinburg Roadrunners. I love the job, don’t get me wrong. This post isn’t about bitching. The general manager, as well as, all the other uppers, treat me well. They keep me paid during the summer and they never abuse my kindness. I can’t say the same thing about the baseball teams, but that’s expected.

A while back, I reported that the Edinburg Roadrunners were no longer a part of the United Baseball League, but a merger league called the North American League. Well, I go into work today – they called me in to help J. put up signs on the wall – and sit down for a breather. As I wait for J. to arrive, I read Doc by Mary Doria Russell and look down at the schedules stacked neatly on the front desk. Having already seen the schedule on the right, I focus my attention on the ones on the left. I heard that we were planning to host soccer games at the stadium, so I quickly write it off as that – completely oblivious of the baseball and bat printed on it. I snap back to the Roadrunners’ schedule and see that several of the teams are missing. So I asked D. what’s going on with the the ones from Illinois. Apparently, they went belly up and sold off. Besides, even I knew how much of a pain in the ass it was going to be to send the teams back and forth.

That’s pretty much when D dropped the news on me – what I had thought of as the soccer team was really the newest team in the league. Apparently, Coastal Bend Thunders are now the McAllen Thunders. I wasn’t even aware that McAllen had a baseball stadium. You learn something new everyday, right? Only, McAllen doesn’t have a baseball stadium (that I know of) and the Thunders will call Edinburg Stadium their home.

Wait. If the McAllen Thunders are playing at Edinburg…that means the Edinburg staff… Oh. Fucking. Hell.

The news that I will be taking care of not one but two home teams was only made worse when I also learned that a new manager was thrown in the mix. Hold on. I’m having a heart attack. You mean to tell me, of all the people I convinced to like me last year, the only one coming back is the one who threatened to choke my ass?! Excuse me while I go bang my head on the wall for a few hours.

San Angelo is still on the roster, which is great. San Angelo liked me enough not to kill me, but not enough to not blare their music in the locker room. Guys, I’m here to keep the peace between you and the umpires. Don’t make my job any harder.

Hope shines like a beckon in the horizon. Workforce has stated that we might get the program again this year. I’ve asked for four workers – two in the morning and two at night. If we don’t get them, the stadium will have to hire me a buddy – hopefully someone who won’t try to screw me over.

Well, it’s still early on. Changes happened after a month, but I hope they don’t happen again. Because I can seriously say, I’m not looking for the hectic scheduling. Oh, and I observe the right to ask for the 19th and 20th in August. If we have all the help we need, this shouldn’t be a problem. I have a girlfriend whose birthday always seems to land on a home game. And they’re this year.

2 thoughts on “Forget taking me out to the ball game, just take me out”