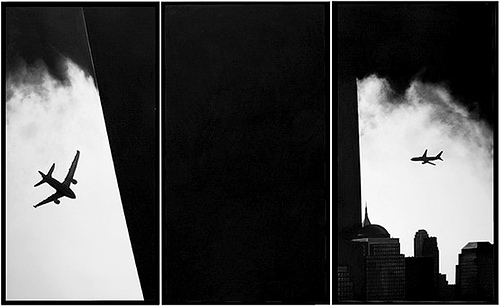 Like most things I cannot explain, I turn to the realm of fiction. However, rather than just leaving your with the last post, I’ll give you a sliver of reality – which, I did at the end.

On 11 September 2001, I awoke to a world-wide change. Someone hit reboot on the system and the universe we once knew was no longer. I’d just hung up the phone with my at-the-time-girlfriend, Jessica – who lived in Brownsville then. She was getting ready to go to school and I was getting ready to go back to bed. See, insomnia hit me hard that year. I was a high school graduate with no ambition of going to college. My senior year nearly left me off in the deep end. Stress and emotions I couldn’t handle were getting the better of me. Soon, sleep became a luxury I was jealous others could afford.

After we said our I-love-yous, I wrapped myself back in the covers and attempted to sleep. But this nagging feeling was tugging at my strings, urging me to give it up and turn on the TV. Normally, I’m a man of empirical evidence, not hunches. It was seven or so in the morning and there couldn’t possibly be anything I was missing out on. Either way, the restlessness overwhelmed me and I turned the TV on to see the first tower. The smoke billowed. It was on the Today Show. Matt Lauer was going on, but nothing was registering.

The World Trade Center had been attacked before and would – I assumed – be attacked again. This was no biggie. I just mutter, “Must really suck to work there.”

When footage of the second plane slamming into the other tower appeared on the air, my heart stopped. This was no accident. This was human nature at its best.

Most people’s instincts told them to pray that the people were all right. My lack of a spiritual form, however, knew that nothing could undo or save those people who were caught above the hit zone. Realization must’ve set in for those people, as well. Soon after, people were leaping from a burning grave into the concrete below. They were taking their own destiny/fate by the throat and saying, “Only by my hand.” Those deaths became so ingrained in our popular culture, whether we choose to accept it or not. Falling man, especially.

My friend, Monica T., jumbled to call me. Jessica called me from school. Their voices were panicked, anger spilling in. Meanwhile, I was lost in another world. A world torn apart from this one. One where nothing like this happened because human nature had to be good. How naive to believe that anything nature throws at us will still beautiful forever.

When the towers fell, reporters were comparing it to the onslaught brought on by the alien space crafts from the movie Independence Day. What a juxtaposition, I thought. I watched, as I assumed the world watched, as they came crumbling down. People covered in the soot of hatred. Some were lost in the clouds, buried forever in the earth of the ignorant. If I could, I’d probably had been crying for their deaths. I wanted so badly to cry for them, to feel some ounce of human connection, emotion. To show my anger toward the assholes who brought this upon innocent people.

The day slipped into night and slipped into morning. The footage was shown around the clock. Musicians took it upon themselves to write ballads. Actors spoke on TV. Politicians put aside ideology. It was as if the ugly has wrought something good. A sense of unity. A unity, I knew, that couldn’t exist, wouldn’t sustain on all our hate.

The world is an ugly place, Mr. Frodo. But there is good. And that good might be something worth saving. But how could I possibly believe that then? How could I believe it now? Has personal current events outshine the world’s?

We haven’t learned anything from 9/11. That sense of patriotic unity washed away when personal agendas and unfounded Weapons of Mass Destruction filled out TV screens. If the goal on September 11 was to tear down our moral fiber, our freedoms and our ethics, then the terrorists won. Because war doesn’t breed peace. It breeds hate. It breeds more terrorism. It breeds stupidity, murderers and xenophobia. It breeds ignorance.

So where were you when the towers fell, you ask. I was at home. Watching TV. Waiting for the world to resume as it always had. As it always will.