Imagine it’s no different than any junky itch. The book hunter—the bibliophile, the bibliomane, the book junky, suffer of the gentle madness—knows when another fix is needed and his nights become restless. This fix started with the hunger for something beautiful on my shelf. For only a $1.50, I purchased Sandra M. Gilbert and Susan Gubar’s second edition to The Madwomen in the Attic: The Woman Writer and the Nineteenth-Century Literary Imagination. But it wasn’t enough. After work Friday, I weaseled down to Barnes &  Noble and purchased two novels (at a $1.79) for my mother, and Erotic Poems by E. E. Cummings and Savor: Mindful Eating, Mindful Living by Thich Nhat Hanh for myself. This morning, in the mail, arrived Dark Secret Love by Alison Tyler.  And later, El Senor, who’s down in the Valley visiting during the winter, arrived and we went adventuring to Barnes & Noble once again where I finally found a copy of Lone Survivor—a book I wanted to see since I saw the movie. 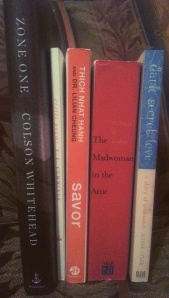 Zone One by Colson Whitehead was purchased earlier in the week, while I’m still devouring (slower now that I like it) a YA read. Still, the itch is still burning up through me and I’m afraid that I can’t stop thinking about placing more novels and novellas and collections of short stories on my shelves. I’m running out of space. It’s only a matter of time before my rooms are wall to wall shelves with books piled on the floors before them, towering higher than Babylon. This book lust is bound to be the end of me, yet I can’t stop feeding the itch. Bringing home strays to live with me. Even in my fantasies with women (the nonsexual ones, guys, sheesh), books are involved. An ideal partner must suffer from the same madness. Must lust for books as much as I do. Can you imagine this perfect union in Barnes & Noble (a book hunter’s heaven)?

Oh, one can only dream. Am I right?

I got Twitter-married this weekend. Not only did I get Twitter-married, but I got Twitter-married to erotica author and editor, Alison Tyler. Now, I’m probably making a bigger deal out of this than I should, but just let me have this one, okay? Be honest, this is as close as I’m going to get to the real thing. And that’s a thought that is both depressing and…well, it’s just depressing. Because I’m a thirty-year-old whose biggest relationship accomplishment is…what? Obviously, I don’t count a Twitter-marriage (because I’m not mentally sane, but I’m not Catcher-in-the-Rye-toting insane).

As a child, I dreamed about adulthood. A romantic out of the womb, a socially awkward kid who grew into a socially awkward adult who uses phrase like “out of womb.” Chuck Klosterman said it best in his book, Sex, Drugs, and Cocoa Puffs: “I want fake love.” I want the sort of love that we’re conditioned to believe in through RomComs and Sitcoms. And not only fake love, but I want a fake life. I want the sort of life you get when you flip on the TV and see how easy it is to move from high school to college to career. Fuck it, let’s thrown in the entire Americana imaginary life–give me a house with a perfect lawn and a white picket fence with the perfect couple smiling and waving as their perfect kids go off to school so they can go back into the house and break out the BDSM gear. Is it too much to ask for the sexy librarian with the whips and rope?

When I was younger, I used to state that I’d have little life crisis to prevent a mid-life crisis in the future. I surpass them all, as well as, my quarter-life crisis which was pretty anticlimactic as I can’t recall what happen.

Truth is, even though I say I want the girl-the-next-door, or the sexy librarian, or MayKay, or English professor, or the philosopher, or the kinky erotica writer, or the Catholic, or the one I fought for and lost on several occasions, what I want is just someone to love me. And to love someone because they love me and because it’s right and because it doesn’t matter how many times I stumble. Because if I have to fight for a person to love me on a year-to-year, month-to-month, day-to-day basis, is it really worth it? No one’s ever had to fight for me. I either loved them or I didn’t. Simple as that.

I want to transcribe the stories I traced into your skin when I loved you. I want to sing out loud, even if I cannot carry a tune to save my life. I want to undo what I put you through, all those years ago, and make it right. I want to tell you how I feel before you’re gone from my life. I want to sit with you in some cafe in France and bitch about people who go to France.

One question remains, what service will I use? WordPress has its perks, but we have our tussles in the past when it came to posts above a PG-13 rating. Blogger is the obvious go to, but Tumblr will give me a larger range of readers and rebloggers. And do I go with a custom domain name, or have the yourname.service.com route? Decisions. Decisions. At the moment, however, it’s just the blueprints. What font will I use as a header? Will I be able to sew together a custom picture for the header? And what posts will I feature first? Write write write.

“The men in the room are all bent into interesting positions. A big blond stands on his hands, balanced and unmoving. Another dangles from rings. A third is leaning over a polished leather horse. Hadley McCarthy watches the men as she moves passed them–imagining that they have been put there for her pleasure, fantasizing that they will never move. Hold still. Stay that way,” begins Alison Tyler‘s novella, Tied up and Twisted (Harlequin Spice). In summation of the story is, Hadley – a domme turned sub – sets her sights on a trainer – “Trainer. In another world, in her other world, the word means something else. There, he’d be Dom. Here, he is Coach.” – while her former sub attempts to win her back. It’s a role reversal I haven’t read before. At least nothing that I found worth retaining. No matter what, a dominate never subs and a sub rarely knows how to dominate.

I could be wrong, though. I’ve only lived vicariously through stories by Alison Tyler (the writer, not the porn star) and anthologies complied by Rachel Kramer Bussel. I, however, never lived vicariously in anything written by E.L. James. Her writing is just terrible. English majors around the world wept with the first pages alone. And I think that’s the subject of this post – it’s surely not about that weird sex dream I had about an older woman I don’t believe really exists (hence the photo of The Burning Lotus [NSFW]). What?! You haven’t heard about her? Either you’re highly religious or dead (and I consider them same thing), but dude. Yeah. Check that out.

ANYWAY. I like erotica. No. Scratch that. I love erotica. Classy erotica – Anaïs Nin – and the current writers. There’s also the guilty pleasure of poorly written fantasies found on blogs and Literotica rip-off sites. Thanks to the ever evolving technology of the day, writers everywhere (good and bad) are publishing works. Thankfully, a nice percentage of these writers offer freebies and I download for my Kindle. Not all of them are good, mind you. And somehow Fifty Shades of Grey managed to slip by caused such a stir that I’m still recovering from the shock.

Am I glad Erotica is getting noticed? Yes. But it’s never been greatly ignored. The only reason this genre is getting so big is the technology. Trust me, it’s the technology, not because the book is a masterpiece.

I work in the Children’s department of a library. I can’t just carry around a book with a semi-naughty cover and read it during my downtime. Brows will lift.

DAMNIT, I’ve gone off topic again. As I was saying, I love erotica. And I’m glad that it’s in the public view (whether that’s because technology or not, should be saved for another post). However, it’s depressing that something so poorly written is the reason, when writers – real writers who believe in editing and revision – are ignored.

Example, when I first picked up Fifty Shades of Grey – before I quickly put it down again – I commented that I can’t see how this is the book that set off the spark. My co-worker turned and replied, “Have you ever read anything else from the genre? It’s pretty much the same.”

Romance and Erotica might be sister genres, but they are not “pretty much the same.” While publishers like Harlequin are publishing both, I can’t see the where the confusion comes from. But Romance is sex word fodder. Erotica is word sex.

Gonna end this post because I’ve gone off topic. I’ll talk about the other thing later. A compare and contrast. Think of this as a rough draft. And the next post a revision.