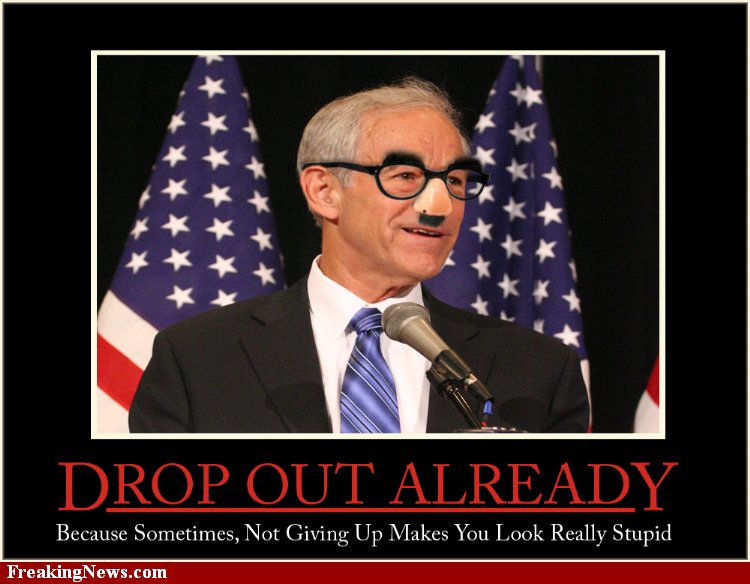 Far from the best man for this government

A friend of mine had the gall to say I was “nit-picking” reasons for downright loathing Ron Paul. His reasons for liking him? He wants to end wars and end US dependency on other countries. I’m sure legalizing marijuana is somewhere in the mix, but one never uses that if one wants to be taken seriously – though, it is a serious matter, mind you.

Ron Paul, however, is a politician. And a bad one. Not only would he rather see you die if you don’t have health insurance, but he’ll say one thing – like he supports homosexuals – when he really believes something else – like not really, but sorta kinda supports homosexuals in the sense that they are allowed to be homosexuals, but not openly, like in the sense of getting married. He also supported “don’t ask, don’t tell,” which – if you watched Rick Perry’s “Strong” campaign ad – you’d know he’s part of a larger hate group known as the GOP – Jon Huntsman, excluded.

Abortion is always a hot button issue for me, as well. Ron Paul doesn’t want to do away with Roe v. Wade, per se, he believes states should make the decision whether to ban abortion. If we lived in a perfectly logical world, this would make sense. However, we don’t. We live in evangelical Christian America and women’s rights would be Snoop Dogg song in no time. This, in turn, also means he’s against embryonic stem cell research, which could benefit so many people’s lives – but as a Libertarian, the lives of others are no matter to him.

I’ll overlook his support for abstinence only education because he is a conservative and hating him for that is silly – besides, I’m a firm believer that if you want your kids raised by the education system, it’s your own fault when MTV is knocking on your door with a contract.

My friend is right, by the way, Ron Paul does want to end war. He also wants to withdraw the US from the UN and disband NATO. He has it in his head that the United States can protect herself without the help of other countries. Pretty much implying that we should stay out of other countries issues and war. Of course, that really helped a lot during both War Worlds, right? I mean, did everyone forget about The Zimmerman Telegraph and Pearl Harbor? It’s clear that Ron Paul and his supporters skipped American History during those important incidents that caused us to enter war. And I’m not saying that war is essential – the world can surely do without – but I’m not delusional enough to believe that by ignoring something, it’ll go away. If anything, it’ll only draw things to us without us knowing it.

And there is a laundry list of things that make Ron Paul the one of the worse people for the job as President of the United States of America. There’s the fact that he wants to end ENDA, that he voted against the Amber Alert, wants to drill drill drill in Alaska, believes that the United States is a Christian nation – even believes there is a war against Christmas (but conveniently ignores the war against Halloween), that he opposes the Civil Rights Act of 1964, he’s against the popular vote – probably because he never received it, wants to revive the Sodomy Laws, and he wants to build a wall along the US/Mexico border.

Oh, but I’m nit-picking. How silly of me. None of these things essentially matter because Ron Paul promises to end war and end our dependency on foreign oil – though that will never really happen, because, let’s face it, the oil companies will never allow it (it’s bad for business, you know). Let’s face it, the only reason people like him so much is the pot issue. Then again, it’s not like a politician ever lied to his supporters, right?

One thought on “Why I Don’t Like Ron Paul”